The Nuclear War in Bible Prophecy 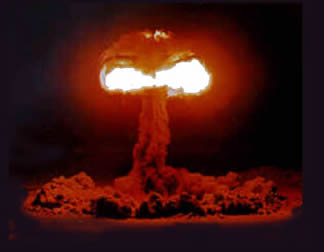 After the attack on America on 9-11-2001, everyone could plainly see that the world is facing escalated turmoil. Hurricane after hurricane destroyed the Gulf Coast refineries and broke levees in New Orleans. Also, a tsunami that killed more than 230,000 people, and people worldwide also were hit by extreme floods, millions of people were suddenly left without power when the national power grid cascaded from one sector to another; unprecedented wildfires ravaged rangelands, killing thousands of livestock; and the worst season of multiple tornadoes ever recorded ripped through multiple communities, destroying lives and leaving behind a wake of unprecedented devastation. We are a nation at war, and the war on terrorism is spreading from the overthrow of the Taliban in Afghanistan to the overthrow of Saddam in Iraq–the Al-Qaeda Terrorist Network that still threatens us.

Starting with the 1999 U.S. led NATO bombing of Yugoslavia to the fact that Osama Bin Laden was still at large and evading justice, all give cause for concern about where this world is headed. An end is coming! But it is not the end of the world, just the end of the world, as we know it. It is the end of this age. All these major historic calamities are like contractions from birth pains. The birth pain process has begun and there is no stopping it. The birth pain will continue is the time of tribulation this being the war where the wicked enemies of America and Christianity, who are the armies of the beast, will be totally destroyed. Then the new age begins, and there will be celebrations of victory for peaceful days ahead, a vast improvement to the way things are today.

Worsening matters, the longstanding ABM treaty between Russia and the United States has been broken. When President Bush approached Russian leader Valadimir Putin to mutually consent to abandon the treaty, Putin told him that the treaty was the hinge pin on which world peace and stability revolve. That treaty banned the deployment of a missile defense system by the United States. They don’t trust us. Previous Russian leader Mikhail Gorbachev said in the past said they can’t let us build one, because once we have a missile defense system in place we could use it as a shield from which to launch a pre-emptive strike. We have enjoyed peace in our lifetime based on mutually assured destruction. But now because we have been attacked and need to protect the country, the current administration has made it a top priority. When Mr. Putin was informed that President Bush was withdrawing from the treaty, he said with a solemn, stern countenance, “Mr. Bush makes a mistake.”

China has vowed to keep Taiwan from becoming independent, even if it means nuclear war with the United States. This is a major unresolved issue that is not going to go away. Nuclear weapon proliferation by hostile nations like North Korea and Iran make for an uncertain future world.

On December 7, 1941 the world witnessed how war begins. Japan had prepared and planned an attack with all their planes and all their ships and all their men to strike the United States with all the destructive force they could muster. That is the rudimentary fundamental of war: to assemble the biggest club with which to clobber your enemy. Then you watch and wait for the right opportunity to strike. Japan must have observed the United States becoming militarily committed in Europe giving them the opportunity to strike while we were at a reduced military capacity When it comes to war, you cannot pussyfoot around. It is a different world we live in today than in 1941. Today the most destructive capability exists in nuclear weapons, and the plans to use them against us are in the making. We are in a similar reduced capacity now because of the war on terror.

Basically, world events all come down to this: There is justifiable concern for being prepared for the worst-case scenario–a massive nuclear attack on multiple cities simultaneously by an alliance formed of nations who are opposed to the United States. The attack comes in the middle of a dark night of a new moon before the harvest, contaminating the nation’s food supply and surface water. Then will come an invasion by a large and mighty army, the likes of which has never been before and will never be again – Book of Joel, Chapter 2.

This is the time of the end-spoken of in the Bible over 2,000 years ago. It’s time to be prepared, for deal with it we must. Surviving it is our obligation to future generations. Recovering and r etaliating is our destiny.

We will execute vengeance on the nations that attempted to annihilate us, and we will secure for future generations a new world without war anymore.

YOU NEED TO UNDERSTAND THIS MESSAGE

I did not speak with President Bush or then-Secretary of State Colin Powell that day. But they and other top U.S. officials still must heed these urgent details.

“They’ll be informed,” the chief of security promised me.

Alarmingly, I’ve learned there can be no way for us to prevent the attacks because our destiny has been set, and things are in motion that no man can change.

If U.S. officials take heed to the information from this document you’re reading now, they could and should step up efforts to teach U.S. citizens to be prepared to deal with a nuclear attack and save themselves.

Consider yourself fortunate to have this timely information. It is because of the Lord’s mercy and loving kindness even now that you are now being informed. It is not God’s will that many will be totally blindsided by the sudden destruction. But they are too busy with the cares of life to take time to listen. Now you can see the warning signs and follow instructions to position yourself and your family for survival.

In this book you’re reading now, I will reveal the scriptures that provide God’s plan for establishing lasting world peace. But will you be willing to pay the price for this ultimate gift that we can bestow upon future generations? It says they loved not their lives to the death. That is the depth of the commitment of the radical Muslims. Unless we are willing to be committed to the freedom we hold dear to a greater degree than our enemies, how can we prevail?

The fact is that the Lord has provoked and stirred up our enemies against us. Unless you heed the warnings listed here, you could be killed suddenly in the middle of the night.

Top American officials openly admit that an attack on us is imminent. Former Vice President Dick Cheney conceded that it’s not a matter of if an attack is coming, but only a question of when. The entire thrust of this message is all about “WHEN.”