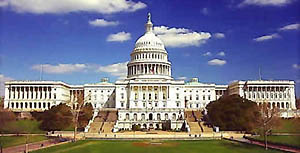 On April 29, 2004, at the Russell Senate Office Building in Washington, D.C., I attended The Legacy of Heroes reception marking the dedication of the World War II Memorial.

Republican U.S. Sen. John Warner of Virginia spoke at the reception and said that the World War II soldiers were the “greatest generation.”

Afterward I spoke with the Senator and told him I had a T-shirt featuring an image of a World War II fighter pilot. Below it said, “The Greatest Generation.” At first I liked it; my friends complemented me on it, but the more I thought about, I began to question it.

War is not a thing of the past; it is still looming in our future.

The words of Isaiah 2 will come true–never again will nation rise up against nation, and never again will men train for war. The swords will be beat into plowshares, and the spears into pruning hooks.

In order to lead our nation, these officials need to know the importance of our challenge. The great senator said I was right.

Later that same week I returned home from my Washington, D.C. trip, I saw U.S. Secretary of Defense Donald Rumsfeld on the TV news, telling troops in Iraq that those who battled in World War II were the greatest generation at that time. But today, Rumsfeld said, “This is the greatest generation.” It made me feel good to hear the truth spreading.

GREAT WARRIORS KNEW
THE BATTLE WAS NOT OVER

Reading my own words. It was in complete agreement with everything I had come to Washington for. The “END” has not yet come, but it is rapidly closing in upon us.   It is the end of this age.
It is the war that will end all wars because our enemies will not survive to ever engage in another conflict; they will be completely destroyed and totally annihilated. It is the end of war altogether, and the beginning of a period of world peace that will last for a thousand years.

As conflict wound down in Germany, U.S. General George Patton wanted to continue liberating Eastern Europe from Russian occupation. Patton warned that if you don’t fight them now, you will have to fight them later.

He had a war-seasoned army already equipped and mobilized. He felt there could not be a better time to deal with this problem that he knew was not going to go away. But he was not allowed to continue.

U.S. General Douglas McArthur was prepared to take on the Chinese during the Korean War. With more than a million men, the Chinese Army came marching to the aid of the North Koreans. He knew that confrontation with China would come sooner or later. He felt it best to deal with this problem right now, or it will only grow and become worse given more time. He was told to back off, but he insisted he was right. McArthur’s defiance drew the wrath of President Harry Truman who fired him. And now we’ve seen our tensions with China continue to intensify. Passing of time has only allowed the problem to escalate. China’s official position regarding the independence of Taiwan has been stated: they will go to any length to keep Taiwan from becoming independent even if it means nuclear war with the United States.

Now we know McArthur was right when he said: “If we don’t fight them now, we’ll have to fight them later.” But now China is a world power with nuclear weapons. They are a rapidly emerging industrial power. A news program mentioned the young male population of China is now estimated at approximately 130 million. That is the result of the one child per couple policy China has had for more than twenty years. This is the main part of Revelation 9’s mounted troops of 200 million and Daniel 7’s fourth beast.

Patton and McArthur were both right and the later they spoke of is now!